Here are the main pillars of our business.

We have more than 25 years' experience of coordinating translation and writing projects, ranging from TV scripts and anime films to PR videos and brochures. We also undertake all kinds of rewriting, proofreading, copywriting and editing work. With our pool of experienced translators, we can deal with just about any language!

We provide top-class narrators and voice artists in many languages to suit any recording project, ranging from TV commercials and documentaries to train announcements and talking books. We also handle casting and voice coaching for actors as well as project coordination work.

CHIHAYAFURU is a popular manga series about playing competitive karuta that has been made into successful TV series and movies. We previously translated the first three Japanese volumes, and they were published in two bilingual paperback volumes. Volume III is a bilingual version of Japanese Vol. 4 and part of Vol. 5. The appendix includes Stuart's translations of all the Hyakunin Isshu poems that appear in this volume.

The Little Mermaid and Other Stories
by Hans Andersen, retold by Stuart Varnam-Atkin, with illustrations by Yukiko Miki
(Kodansha, Tokyo, 2018; full colour illustrations)

This new and expanded version of the book first published in the 1990s includes Japanese notes for students of English.

This French-Japanese bilingual edition of Stuart's popular English book "The Best of Japanese Culture" includes Stuart's photographs. It will be useful not only for French speakers interested in Japan and the Japanese language, but also Japanese students of French.

This prize-winning guide to all kinds of green tea, their history and their many uses has now being republished in a paperback edition. Featuring many ideas for refreshing beverages, recipes, and tea brewing secrets, it is lavishly illustrated with colour photographs.

Following the 2015 Japanese-Korean version of our explanation of many aspects of Japanese culture in detail, this bilingual book will be useful not only for Chinese interested in Japan but also Japanese students of the Chinese language.

Stuart is the co-presenter and co-scriptwriter with Atsushi Iguchi on this series focusing on English writers and locations in England associated with them, including Shakespeare (Dover), Chaucer (Canterbury), Rupert Brooke (Cambridge), the Brontë sisters (Haworth), Wordsworth (Grasmere), Beatrix Potter (Near Sawrey) and Lewis Carroll (Oxford). Stuart and Atsushi read many extracts from the programmes on the CD, along with Emma Howard, and the textbook includes many of Stuart’s photographs. There will be repeat broadcasts until 2020. For the hearing-impaired, there are English and Japanese subtitles. Please check the current broadcast times on BS Channels 231, 232 and 531 in Japan at these links:

Stuart is the narrator on this 5-minute programme introducing many aspects of traditional Japanese culture.

These programmes can be seen worldwide at any time on the jibtv (Japan International Broadcasting Inc) website:

•OUR BLUE PLANET Saving the Earth for the Future (BBT translation and Stuart's narration)
https://www.jibtv.com/programs/our_blue_planet/

This is the second in a series of bilingual textbooks with realistic conversations in English to help Japanese explain various aspects of normal life in Japan that foreigners ask questions about. The topics include chopstick etiquette, hot springs, ryokan inns, ramen, bullet trains, mottainai, temples and shrines. The 2 attached CDs feature all the conversations and useful expressions recorded by Stuart Varnam-Atkin, Emma Howard, Carolyn Miller and Josh Keller.

This is a Korean translation (by Seung Hyeon-Ju) of the 2007 English-Japanese book “Who Invented Natto?”, explaining many aspects of Japanese culture in detail. It will be useful not only for Koreans interested in Japan but also Japanese students of the Korean language. The translation has simultaneously been released in South Korea by the Hanul Publishing Group.

GREAT DIALOGUES FROM THE WORLD OF SHAKESPEARE (The Japan Times)
by Stuart Varnam-Atkin, translation by Yoko Toyozaki

To make Shakespeare easier to understand, Stuart adapted and modernised 96 famous dialogues from As You Like It, Hamlet, The Merchant of Venice, and Romeo and Juliet. The book also explains 57 well-known quotations from the plays to show their relevance and use today. Yoko translated everything, including the footnotes and synopses of the plays. The attached CD-ROM includes all the dialogues read by Stuart.

The major part of this bilingual book is Stuart’s adaptation of A Christmas Carol by Charles Dickens. Stuart’s introduction was translated by Yoko.

This bilingual book presents an explanation of a broad selection of over 80 colourful aspects of Japanese culture to answer the many questions that foreigners tend to ask about Japan. The colour photographs, some taken by Stuart, were carefully selected to give a vivid visual idea of Japanese life. The book is perfect for anyone who needs to explain Japanese culture in English or as a beautiful reminder of Japan for visitors.

This is the second volume of Stuart’s mini-essays on a variety of cross-cultural experiences and thoughts on life in Japan based on the Stuart’s Titbits column in the textbook for the Trad Japan TV series (NHK Educational). It includes more of Stuart’s photos taken in the 1970s. 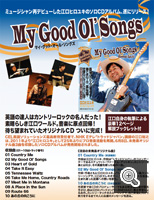 Eguchi Hiroyuki, Stuart’s co-presenter on Trad Japan is now reviving his musical career and this is his first solo CD, on which he not only sings but plays electric guitar, electric fiddle and drums on some tracks. It includes three original numbers, including Country Me, lyrics by Stuart, who also attended the vocal recordings as advisor. There are also cover versions of songs by the Eagles, Neil Young, Stevie Wonder, etc. Stuart makes a brief appearance as a radio voice on Track 4!

CHIHAYAFURU is a popular manga series about playing competitive karuta that was recently made into a successful TV series. We translated the first three Japanese volumes, and they have just been published in two bilingual paperback volumes. In addition, Stuart faced the challenge of providing a new translation of all 100 Hyakunin Isshu poems in rhyming couplets, which are included at the end of the books, #1~50 in Vol.1 and #51~100 in Vol.2:

Parting before the sun comes up
Is such a cause of pain,
Though I know that when the sun goes down,
I’ll be back in your arms again!
(#52, Fujiwara no Michinobu)

Some of Stuart’s cross-cultural experiences and thoughts on life in Japan are expressed in 30 bilingual essays based on the Stuart’s Titbits series of mini-essays that appeared in the textbook for the NHK TV series Trad Japan. Also included are 40 of Stuart’s black-and-white analogue photos taken back in the good old days of the 1970s!